The window cleaners who turned superheroes for a day

The usual team of window cleaners at a Canadian hospital were replaced by a gang of superheroes, delighting the young patients inside.
Spiderman, Batman, Iron Man, Superman, Thor and GI Joe assembled earlier this week at the Kingston General Hospital in Ontario for three hours of cheering window cleaning. The hospital’s photographer was on hand to capture the reaction on the wards and the pictures have been shared widely on social media.

‘It was awesome!’
Luke Carter, aged seven, was in hospital serious injuries from a quad bike crash when the superheroes arrived. He was moved from critical care to the other side of the hospital so he could see them.
“He was really excited by the distraction” says his mother Bailly, 32. “Someone gave him a gift of a Batman toy and he was holding it up to Batman.”
“The superheroes were there for a good 20 minutes. They were drawing smiley faces in the soap and giving the kids thumbs up through the glass.”
Luke said the day had been “awesome”. 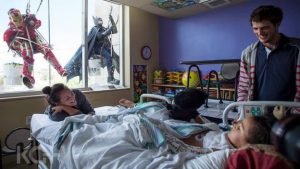